Mention growing rhubarb around a Texas gardener and you’ll probably get a look something like either “what’s that” or “where are you from.” Most southerners only experience with rhubarb has been out of a can of pie filling and may not understand why transplanted Texas immigrants from northern climes long for that glorious culinary delight, fresh strawberry rhubarb pie. You can grow rhubarb in Texas. It won’t be foolproof, but it’s very doable.

The History of Rhubarb

Rhubarb is a cousin of buckwheat and garden sorrel. It is native to China where historical records dating back to about 2700 BC detail its use as a medicinal herb for various ailments. Marco Polo brought it to fame in the west as a medicinal plant. For a period of time in the late 1700’s through early 1800’s, as a result of political conflicts, Chinese emperors forbade its export to the west.

It wasn’t until the late 1700’s that we find reference to rhubarb as a food plant. By about 1800’s it had made its way to America where it began to become a popular vegetable in northern gardens. Most rhubarb production now is centered in the states of Washington, Oregon and Michigan, although it is a popular home garden vegetable across the northern tiers of states.

In northern gardens it is grown as a perennial and harvested from late spring through summer, depending on the location. Southern gardeners who have purchased plants (dormant roots) or otherwise tried to grow this vegetable as a perennial have failed dismally as the infernal heat of summer combines with fungal rot organisms to deal it a fatal blow. This is the primary reason some people get discouraged trying to grow rhubarb in Texas.

Grow Rhubarb in Texas as a Winter Annual

The key is to rethink the plant’s traditional culture and to grow it as an annual. What we call winter here in most of Texas, rhubarb calls sporadic cold snaps. It can be grown in most of the state from August to May and then discarded to make room for some other heat loving vegetable. You can also purchase roots and plant them as soon as the companies will dig and ship them, but this is MUCH more expensive as they still will be only annual plants for us. So here are the basics of how to grow rhubarb from seed in our southern climate. In mid to late August plant seeds of rhubarb indoors. Most rhubarb varieties are vegetatively propagated and sold as dormant roots, but one called ‘Victoria’ is readily available from seed. ‘Glaskin’s Perpetual’ is another variety to try but may be harder to find. Soak the seeds in warm water for a few hours prior to planting. Then fill 4-inch pots with a good potting or seed starting mix. Place two seeds in each pot (to hedge your bet) and cover them about 1/4 inch deep with the mix. Keep them indoors at room temperature until they sprout, when they will then need to be placed in a very bright window.

Once the seedlings are up and on their way they can be moved to a bright shady outdoor location. Keep the soil moist but take care not to keep them soggy wet. When they are a week old start fertilizing with a dilute liquid solution each time you water them. Soon afterward move them to a brighter location with some morning sun.

Prepare the garden soil well prior to setting the transplants out into the garden. Rhubarb is fairly tolerant of a wide soil pH range and texture. However, it is beneficial to mix several inches of compost into the soil and to plant on raised beds to facilitate drainage.

After the young plants are about 4 inches tall or have 3 to 5 leaves you can plant them out into the garden. This will be in about late September or early October. If the weather is still hot, a makeshift shade structure over them will help a lot to get them through the transition.

One easy technique is to cut a bamboo shoot or a small juniper branch with leaves attached and stick it into the ground on the west side of the plant leaning over it a bit to provide filtered shade. Within a few weeks as the heat begins to ease up a bit the plants will be acclimated better and ready to take off on their own.

During this transition time watering is critical. The plants need to stay fairly moist, but not soggy wet. Rhubarb is susceptible to several fungal rots and if you overwater the plants they will quickly succumb to stem and crown rots, and die.

As the weather moves into the mild days of fall rhubarb plants will slowly start to take off. Fertilize them monthly from September through April with 1 cup of the same product used prior to planting per 100 square feet. 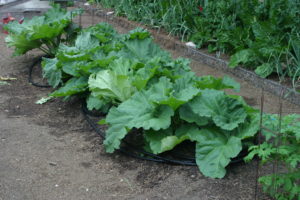 While the plants can take considerable cold, a hard freeze will damage the above-ground leaves and petioles. For this reason some protection on very cold nights is worthwhile. Milk jugs for small plants or clear plastic tunnels for larger plants in rows can protect the above ground parts and give you a head start on the spring season.

Only Eat the Stalks – Leaves Are Poisonous – Okay to Compost

By late winter to spring the plants will resume rapid growth. This is the time when harvest may begin. In Texas rhubarb reaches a respectable size by about March or April and can be harvested on through May. The edible portions of the plant are the elongated and thickened leaf stalks. Grasp a leaf stalk and pull sideways. They break off easily. Or if you wish you can cut them off. Immediately trim off the leaves leaving just the stalk. Then take the stalks inside to wash and refrigerate them. Harvest in the morning as the leaves wilt rapidly in the heat of the day.

Only the stalks are to be eaten, NOT the leaves on the end of the stalks. Rhubarb leaves contain oxalic acid at levels that can be poisonous. However, while the leaves contain high concentrations of this compound, the levels found in the stalks are very low and not considered hazardous. For that matter, oxalic acid is also found in low levels in many other vegetable we eat including spinach, cabbage, beet greens, and to some degree potatoes and peas. Some references indicate that stalks with cold damage (soggy soft areas) or those with significant frost damage to their leaves should also be avoided, but this situation is more common on fall harvested rhubarb in the north and is generally not seen here in Texas during our spring harvest time. It is okay to put the leaves in your compost or use as mulch since the microbes will neutralize the acid fairly quickly during the decomposition process.

More Green Than Red but Tastes the Same

When you grow rhubarb in Texas it will generally be more green than red in color. This is partially due to our warm climate, partially because the reddest varieties are not available from seed, and also because our Texas plants are seedlings and therefore have considerable genetic variability. But they are quite productive and the quality is fine.

Rhubarb is not eaten fresh but rather is cooked in pies, tarts and sauces. The most famous dish of course is strawberry rhubarb pie. By a fortuitous coincidence only explained as divine design our Texas rhubarb season and strawberry season run concurrently. So you can plant a strawberry-rhubarb patch this fall and enjoy a great harvest in spring.

For a wealth of information on using rhubarb in great culinary creations and many wonderful recipe ideas, check out the following web sites: The Rhubarb Compendium and on the National Center for Food Preservation.